Hi, this is Lawrence Patrick Bernardo, and I’m a postdoctoral researcher in Nakamura Laboratory. It’s my first time to post here, and it also seems to be the first one in English.

As many of the students are busy with either their final thesis preparations or job hunting, I felt it was a good time for me to finally say something here, and so I will be telling you about our summer field survey this year in Ishigaki Island.

The survey was conducted from August 4 to September 3, 2018, and most of the students from both Nakamura Lab and Nadaoka Lab participated. And although I had joined the Ishigaki survey many times in the past as a student in Nadaoka Lab, it would be my first time as a researcher, and by far my longest stay in the island as I was there for the entire survey period. Other participants came and left, staying for a week or more depending on their schedules, except for Ideura-kun who also stayed for the whole survey duration. 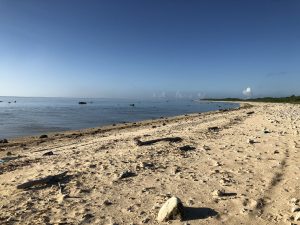 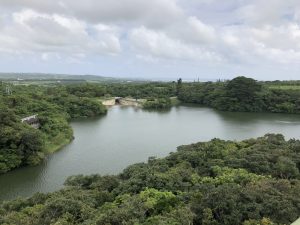 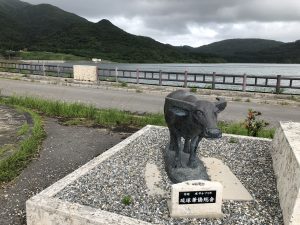 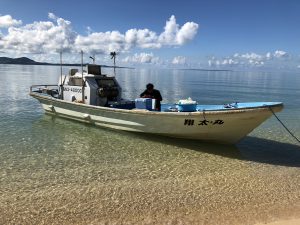 Our base of operations was Minshuku Shiraho (民宿しらほ), a place which goes way back in its connection with Nadaoka Laboratory, and whose staff has always supported our fieldwork activities and more. And from the start everyone was busy with either preparations or actual on-site work. As the fieldwork involved most of the students, we had a number of different study areas in the island. These included the Shiraho fringing reef site close to Minshuku Shiraho, the Fukido mangrove and seagrass sites which were on the other side of the island, and the various watersheds, farming, and cattle areas within the island for those doing terrestrial studies. Eventually some of us would also take a boat out to sea in Nagura Bay and further offshore on the western part of the island.

The activities we conducted varied greatly, depending on the study focus. One group was doing work related to remote sensing and habitat mapping (mainly Nakayama-san, Yamada-kun, Kominami-san, and Yennie-san, with Otsuka-san and Ikenaga-kun of Nadaoka Lab), which involved tasks such as aerial photography using Phantom drones, quadrat sampling to assess benthic cover, and sampling of both seawater column and sediment pore-water parameters. These were conducted mainly in Shiraho Reef, although drone flights were also conducted in the Fukido area. Another group was focused on the Fukido mangrove forest (mainly Ideura-kun, with Yoshikai-san and Kawasaki-kun of Nadaoka Lab), for which the main activities were the deployment of various standalone sensors, 24-hour and spatial sampling of soil pore-water salinity, mangrove tree density and species distribution measurements, and detailed investigations of mangrove root characteristics. 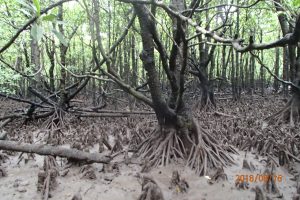 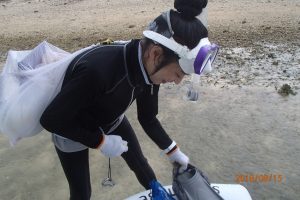 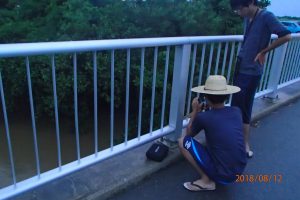 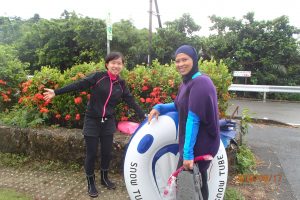 There was also a terrestrial group (Okamoto-kun, and Ando-kun of Nadaoka Lab), which conducted water sampling of rivers on the island, particularly continuous water sampling in the Todoroki River located close to Shiraho Reef. Other activities included floating litter collection and camera monitoring in rivers, and rainfall simulations on farmlands. And finally we also had a physical oceanography group (mainly myself and Amri-kun), which was tasked with the maintenance of the continuous monitoring platforms in Shiraho Reef (which has been conducted by Nadaoka Lab, and more recently jointly with our lab, from as early as 2007), and oceanographic profiling and water sampling in Nagura Bay and north of Sekisei Lagoon. Nakamura-sensei arrived sometime in the middle of the survey period to oversee all of the activities and lend assistance where necessary. And although we all had our specific study areas of focus, whenever there was a lack of manpower, we all did our best to help other groups. 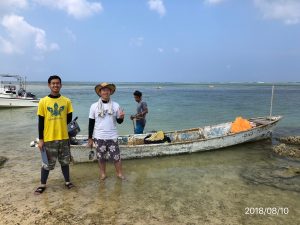 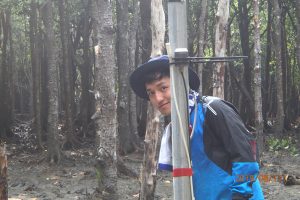 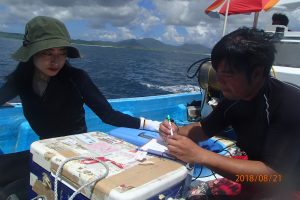 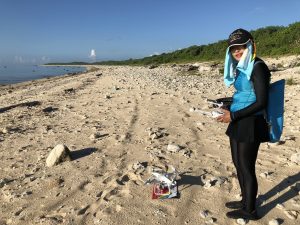 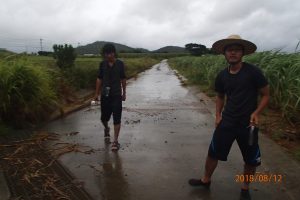 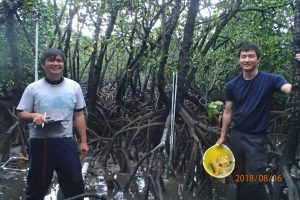 There were some notable things about this summer’s survey. First, a team of researchers from the University of the Philippines, led by Dr. Ariel Blanco and Dr. Eugene Herrera, came along with Prof. Nadaoka and participated during the first week. They assisted us in our drone and mangrove activities, as part of the BlueCARES project. They also flew their own eBee drone, which was quite interesting to observe in action, especially in the contrast in manner of flying with the Phantom model. We were also visited by Dr. Atsushi Watanabe, who was with us in Nadaoka Lab for many years. He was always a part of the Ishigaki survey, and had consistently assisted all of us present and former students in our research work. This time though, he was on vacation, and came with his wife and kids to wish us well. Also, during this field survey, we had a barbecue party on the beach near Shiraho Reef! In all my time in Nadaoka Lab participating in surveys, this is the first time I experienced this, and I praise the initiative and efforts of the students (led by Ideura-kun) in setting up such a fun and memorable experience. 😀 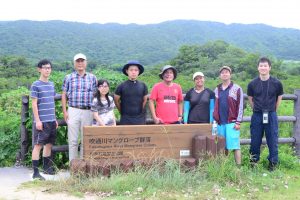 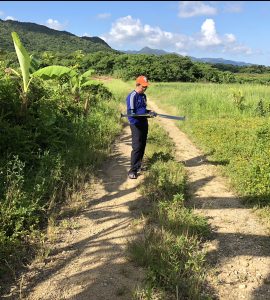 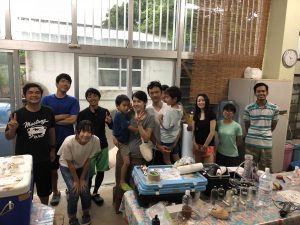 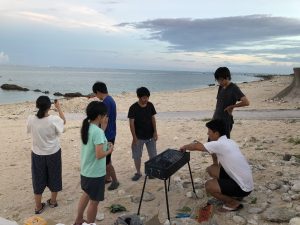 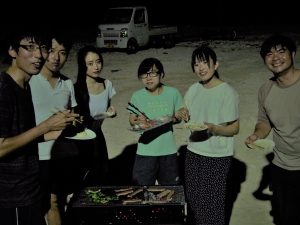 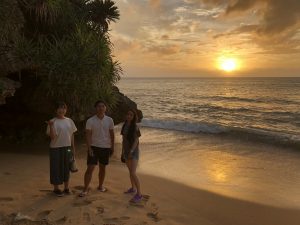 The fieldwork also had its share of unpleasant events. The weather did not always work in our favor and at times we had to bear with strong winds, waves, and rain, being careful to call off our activities when conditions became too harsh. Some of us had to endure getting wounded or tripping while walking in around the rocky areas of Shiraho reef or in the mangroves, or getting stung by insects. But they’re all part of the fieldwork experience, and help make it interesting and memorable.

For me in particular, I will remember this survey most for the final 10 days or so. During this time, only 3 members were left, namely myself, Ideura-kun, and Kominami-san. And we all belonged to different groups and hence were focused on different activities and study areas. In spite of this, we were able to properly coordinate our activities and help each other out, even if we had to move from one side of the island to the other and work in the coral reefs, within the mangrove forest, and out at sea. Being the last members on the island also meant that we had to do the final packing and cleaning up, as well as settle receipts. But it was not without its perks, as we got to experience the Obon festivities, visit additional tourist spots in our free time, and were also treated to an amazing dinner on our last night by our hosts at Minshuku Shiraho. 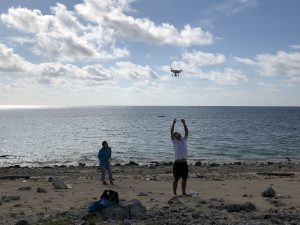 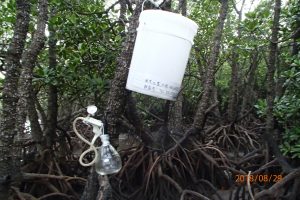 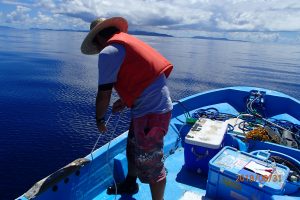 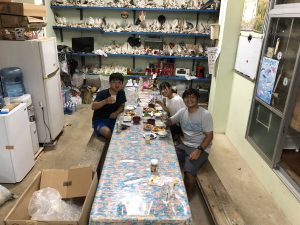 Well, this is quite long for a first post, so maybe it will be a while before I do so again. I hope I’ve been able to give a good enough account of our field survey this year. Also, I encourage more of our students to post here and share their experiences.  🙂