Hello everyone, let’s check out this news!

This year, one of our lab member, Faisal Amri (M2), participated in Asia-Oceania Geoscience Society (AOGS) 16th Annual Meeting as a poster presenter. The meeting took place in Suntec City, Singapore from 28th July to 2nd August. This annual meeting was a great opportunity for our lab to introduce what we are doing to international researchers society and for future purpose, some collaborations between researchers might be started from this kind of event. 🙂 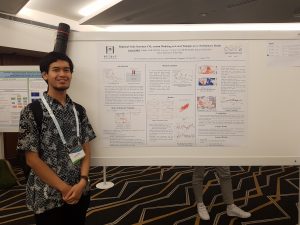 Amri and his research poster

There were many earth scientists attended the meeting and Amri considered this conference as one of the biggest scientific conferences that he ever attended (More than 25 sessions covering solid earth, ocean, and atmospheric science). In addition, what made this event memorable for him is that he found many interesting findings regarding regional-scale dynamics in his study area and he believed it could help him to understand the mechanism that may influence the CO2 system dynamics.

Here are some researchers that he met at the conference

Next AOGS 17th Annual Meeting will be held in Vivaldi Ski Resort, South Korea.  If you were interested, do not forget to check for the updates! 😀